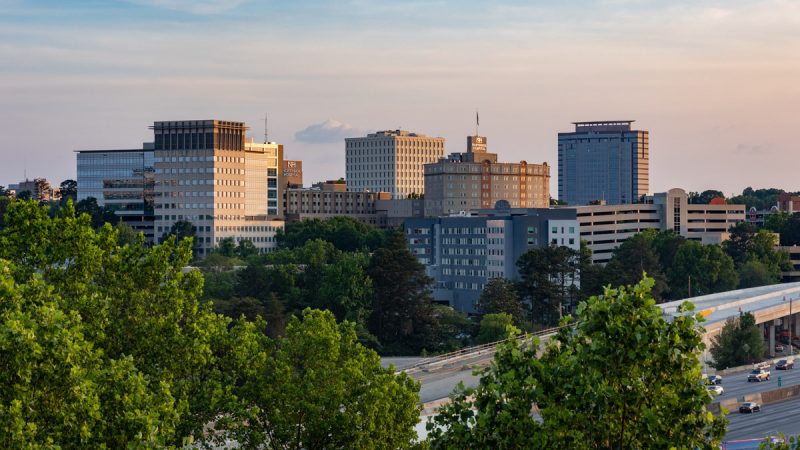 For over 50 years, the Medical Center area has been a bastion of life-saving healthcare for Sandy Springs and surrounding communities. And with an expansion boom underway, it’s increasingly a residential neighborhood as well.

Anchored by three major hospitals, the Medical Center is based at the intersection of Johnson Ferry and Peachtree Dunwoody roads in the southeast corner of the I-285/Ga. 400 interchange. Long predating Sandy Springs’ founding in 2005, the area now sits within that city and borders the neighboring city of Brookhaven.

The Medical Center began in 1970 with the establishment of Northside Hospital, which arrived in response to the north metro population boom. The hospital still frequently tops national lists of annual maternity-ward births and many local residents are “Northside babies.” Emory Saint Joseph’s and Children’s Scottish Rite Hospital joined later in the ’70s.

The area now includes many medical offices and outpatient surgical centers as well. In recent years, an apartment complex and a hotel have joined the mix, with more such development on drawing boards. Long a car-oriented place, the accessibility improved greatly with the arrival of a station on MARTA’s Red Line in the 1990s, and now Buckhead’s PATH400 multiuse trail is getting an extension along Ga. 400 through the Medical Center to Peachtree Dunwoody.

“Pill Hill” is a widely used nickname for the Medical Center, though it seems to be falling out of favor as corny or distasteful, especially following the opioid drug abuse crisis. The “hill” is the ridge atop which sits the Johnson Ferry/Peachtree Dunwoody intersection. The area is known for rush-hour traffic jams, though its wide streets are usually open at other times. Community tensions arise from time to time as developers seek to expand medical or other uses into adjacent neighborhoods.

But fast and convenient access to some of the best medical care in the state is an asset to Sandy Springs life that can’t be overstated. Here are some of the key locations in the Medical Center.

Northside opened in 1970 with 250 beds. It’s now the flagship hospital of a large and growing regional healthcare system. The hospital today has over 650 beds, more than 3,500 doctors and 11,000 employees.

Saint Joe’s, as it’s known locally, was founded in Atlanta in 1880 by members of the Catholic order the Sisters of Mercy. It moved to the Medical Center in 1978. In 2012, the hospital joined the massive Emory Healthcare system affiliated with Emory University.

This children’s hospital was founded in Decatur in 1915 and shortly thereafter took on the “Scottish Rite” name in tribute to philanthropy from the Masonic order. The hospital came to the medical center in 1976. It’s now part of the Children’s Healthcare of Atlanta system, which also includes a Midtown hospital and another under construction in Brookhaven.

Separate from but related to Scottish Rite is the Sandy Springs Ronald McDonald House. It’s one of many such facilities around the country that provide temporary housing, at nominal or no cost, for families of ailing children who are being treated at nearby hospitals. The Medical Center’s house, serving Scottish Rite Hospital families, opened at 5420 Peachtree Dunwoody Road in 1994 and was rebuilt as a bigger, modern facility in 2015.

Cortland at the Hill Apartments

This 287-unit luxury apartment complex was a pioneering move at adding housing to the Medical Center, especially for nurses and other hospital employees. The City joined in with a deal that approved its zoning in exchange for making about 10% of the units affordable to middle-class renters for 10 years. Real estate company Cortland bought the complex in 2019.

This 186-room hotel, which opened in March 2021, is the newest major addition to the Medical Center. It’s also oriented toward patients and their families facing long stays, offering 46 apartment-style units with full kitchens and a “Very Important Resident” program for those staying 30 or more nights with such features as complimentary grocery shopping. The hotel is within Peachtree Dunwoody Pavilion, an office park that has a larger, partly stalled renovation and redevelopment plan that could include a large multifamily residential building.