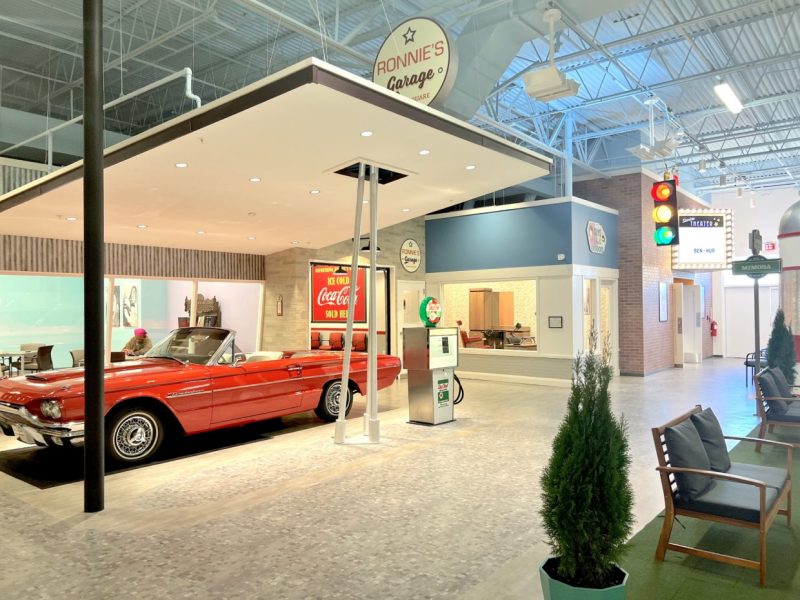 Atlanta natives Sarah and Kellen Stennett could be called serial entrepreneurs, owning various businesses and franchises. But their latest venture in Sandy Springs is motivated more by family than just business.

“We liked the idea of diversifying the types of businesses” the young couple invested in, said Sarah Stennett. But for her, the bigger attraction to opening Town Square – a unique day-time senior center that focuses on dementia and Alzheimer’s – “was really about me being able to do something more meaningful.” Noting that her husband’s grandfathers had Alzheimer’s, as well as her grandmother, she stated, “I can’t think of a more rewarding way” to honor them.

More specifically, one “storefront” in the 12,000-square-foot facility at 8601 Dunwoody Place that resembles a mid-20th century American town, is named Ronnie’s Garage, in honor of one of Kellen’s grandfathers. The plaque on the wall recounts that Ronnie was an amateur stock car driver at the Peach Bowl Speedway in Atlanta in the 1960s. Outside the storefront, and perhaps the biggest eye-catcher in the entire center is a bright red 1964 Ford Thunderbird.

The innovative senior center includes 12 other separate activity rooms that represent popular businesses from the 1950s and 1960s. They include a 1950s diner, aptly named Rosie’s, and suitably displays several Coca-Cola signs, with Atlanta being home to The Coca-Cola Company, and Town Square situated right across the street from a Coca-Cola bottling facility.

Other “shops” include the Starlite Theater with photos of Judy Garland, Marilyn Monroe and John Wayne, among others, papering the walls. There’s a music room called “Spinners” to engage members with nostalgic tunes, a health club featuring themed exercise classes, as well as a library, working hair and nail salon, crafts room and recreation room that includes a pool table and board games.

The facility, emphasized Stennet, is “more than an adult day care center. We want to be a resource for the community.”

While Town Square may have satisfied Stennett’s desire to target individuals with dementia and their families due to her family’s connections, the investment is also based on sound business conventions: There’s a growing demand.

The risk of developing dementia, which includes Alzheimer’s, doubles about every five years as people grow older. Baby boomers born between 1946 and 1964, represent about 21 percent of the U.S. population. According to the Alzheimer’s Association, one in six people over 80 have dementia. “It’s a physical disease that presents psychologically and mentally,” said Mary Caldwell, director of Town Square. “Dementia is a broad umbrella term that encompasses changes in thinking and behavior that people notice.”

Statistics indicate that the aging population in Atlanta is growing. “The numbers are staggering. There’s a huge need,” said Stennett.  She added that the Sandy Springs location is just the first senior center she and her husband, and in-laws – Kevin and Rhonda Stennett who are silent 50/50 partners – plan for the Atlanta area.

“We have licenses for two more facilities in the metro area and we’re starting to think about where we go next,” she noted. Buckhead, where the couple live with their blended family of five children, would be ideal, she said, but Decatur and Alpharetta are other possibilities.

The fact that some dementia is hereditary is “scary” for her. But it’s not just the person with the diagnosis that is impacted. Care partners, as Town Square calls the spouses and children, “are significantly more likely to be diagnosed with dementia and other health problems,” she said.

Town Square employs a nurse and other staff to care for its members and provide support for the care partners. Stennett underlined the owners’ and staff’s intention to be a community resource for people with dementia and their families. Already Town Square is getting referrals from Emory University’s Integrated Memory Care Clinic at Executive Park. “Their licensed social worker is our contact,” she said, along with many neurologists.

Providing services to the community is not new for the Stennett family. Kellen owns the Goddard School in Buckhead, as well as three Club Pilate studios with a partner. He also owns three locations of All Dry, a water and mold remediation franchise. Now, thanks to the Stennetts, the Sandy Springs area has a day senior center focused on a growing demographic population.